How many clamps does it take to clamp a sheer strake?

Lots. Here they are in action.


Last week began with ripping. First Robbie and Trevor planed all the 1x6 from Westwind. Then Robbie ripped it into 1x3s.

He used his Festool guides and skill saw on the long workbench (in the right in this picture) to do the ripping, and it worked beautifully.

I'll add a picture later -- it's an interesting system.


Next step is decking, and the sheer strake goes in first.

You may be wondering, "What happened to the galley?" We have been threatening to mock up the galley for over a year!

I did suggest that we wouldn't need a galley if all we eat are Cliff bars, and while there was enthusiasm for that suggestion it has not yet won the day.

While we dither, construction on the deck is underway. Fortunately dithering can happen mostly during coffee breaks. 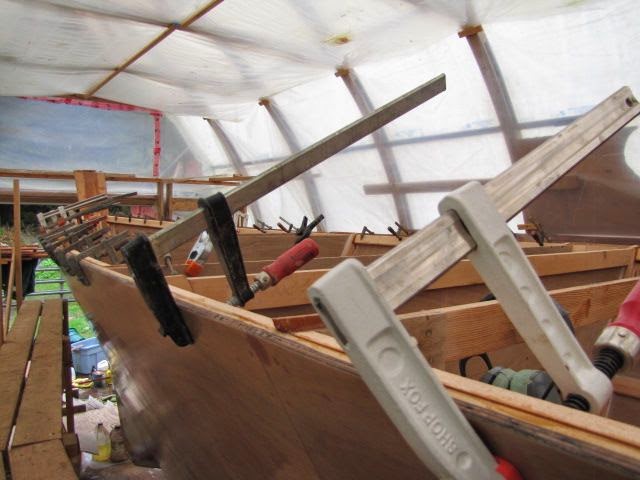 The weather has been consistently reasonable for gluing recently -- so different from struggling to build when the temperature is lower.

With the sheer strake in place, Trevor began work on the deck. You can see the decking dry fit over the forward berth in the picture below.

Next up? More decking, more gluing, then likely the cabin top.

It's an interesting time in the project. With the other hull complete, it feels like we are moving closer to completion with every step. This is the last sheer strake. The last deck over the last forward berth. Of course it was always true that any successful step forward moves the project closer to launch, but with a catamaran there was a sense of going uphill on the first hull. Now we're over the hump and on the downhill side.

And yes, I haven't forgotten the deck. And the masts. And the rigging. And the sails. And the galley mockup!