Much to be done. We're hoping to begin glassing next week, and Robbie and Trevor have both been very occupied in making it so. 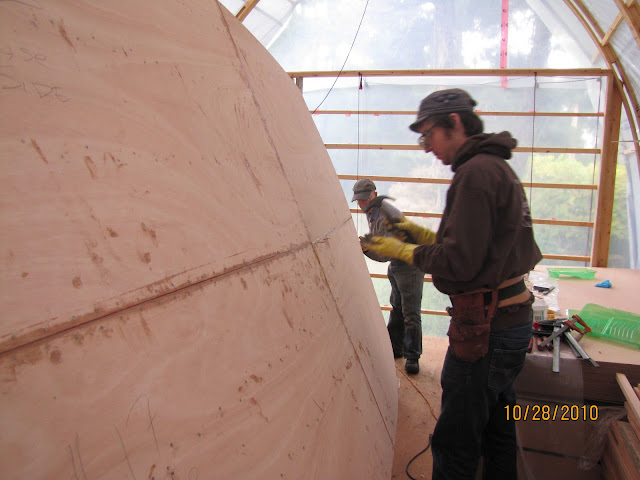 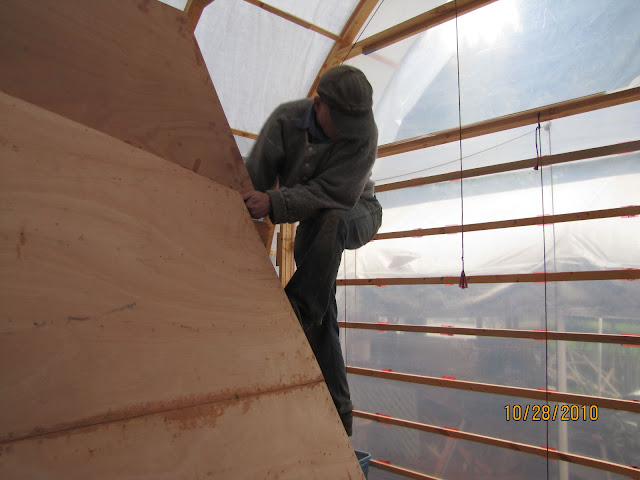 ... and the second hull is planked!

First came the fairing of the stringers, and dry-fitting of the planks... 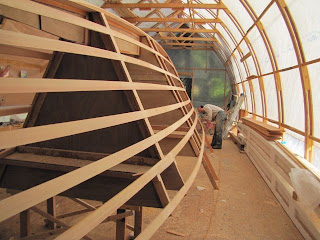 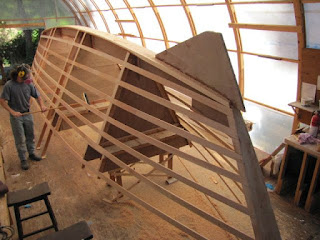 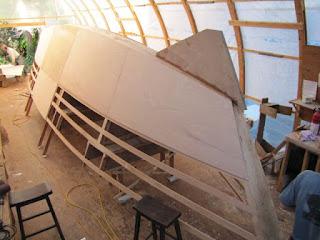 ... that was Monday. We had expected it to be two days, so there was definite jubilation.

Then came the labelling, all in appropriate nautical terminology of course. 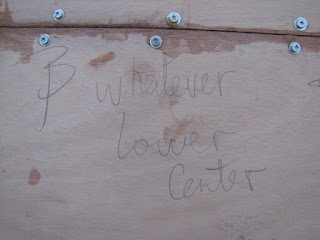 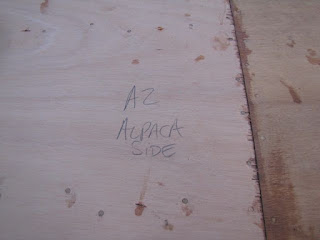 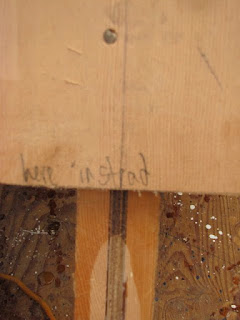 Then came Tuesday. Cousin John Hodgkins came to assist... little did he know that he would spend nine hours wiping up epoxy inside the hull -- oh, and scraping it too, sometimes. He has definitely earned the little umbrella in the drink on deck once we're launched.


Procedures changed a bit for Wednesday. John was working on a project of his own, so the three of us took on the second side. In some places on the first side, Trevor used 1" steel screws rather than nails. Screws are removed once the glue has set somewhat. Nails are not. Both the screws and the nails have the same function, though -- they are not structural, they are just used to pull the plywood in to the stringers. Neither Trevor nor Robbie were entirely happy with the nails we had (for supplier reasons, they weren't the length we had for the first hull). So for side two, we decided to use only screws. This turned out to be quite a bit quicker than the nailing procedure. Robbie was able to take up John's fallen wiping rag while Trevor put the screws in from the outside.

We finished the second side more quickly than the first -- the screws were definitely quicker, and pulled the plywood in more completely. The second day was a lot calmer than the first, too -- minimal hammering.


And after appropriate cheers, rum, wine and congratulations all round, a bit of cleanup to be done. 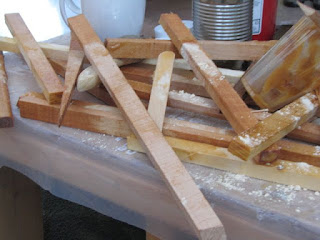 Today? On with the keel (two more planks added), and underway with the stem, shown below bristling with clamps at the end of the day. 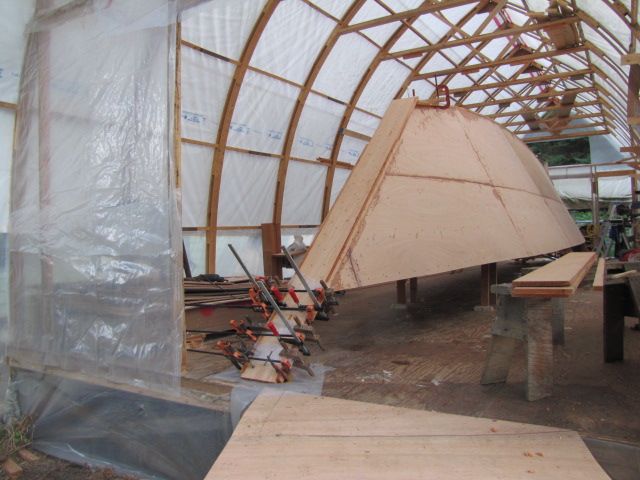 With the first hull finished, what could we do but begin another one? And quickly, too. Average temperatures are a good bit lower in November than they are in October. We're fairly sure we'll get the temperatures we need to finish glassing the second hull if we can do it before Hallowe'en... but after that would need either good luck or a lot of propane to heat the shop.

We may all be zombies by Hallowe'en, but it does look like we're on track. Here's the progress so far.

Hull #1, the starboard hull, is safely established in the alpaca meadow. Trevor and Robbie built an astonishingly large shelter to go over it. The shelter will protect the paint job from UV damage. We really want the hulls to look the same age when we launch. 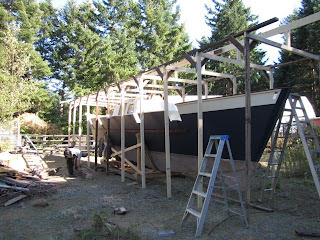 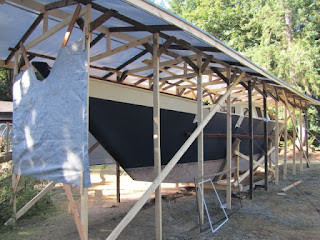 The frame looked absolutely gigantic. It seemed a bit more reasonable in size once the tarp was in position.

In the photo on the right you'll see that one side of the shelter isn't tarped. That's the north-facing side; it really doesn't get sun, and leaving it open means the hull is more accessible. Hatch covers are open, and screens have been installed over them. (We want to be the first to live aboard.) The shelter's tied down with ropes to rebar -- you can see the guys in the picture, but you do have to look closely. 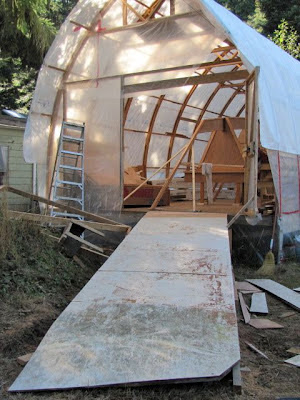 While in preparation and cleanup mode, Robbie and Trevor put a solid top on the ramp at the end of the boat shop. It seemed to make a lot more sense than removing the ramp they built to haul the first hull out. It will also eliminate my graceless scramble to get into the shop from that end -- the other end has steps.
Posted by Mary Wilson at 10:26 AM No comments: