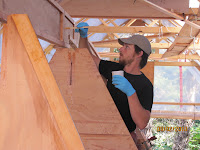 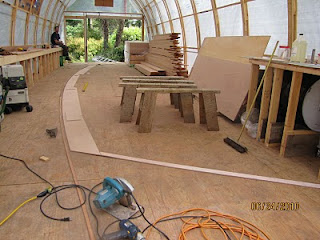 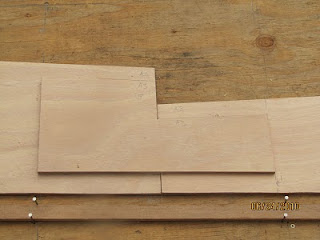 Posted by Mary Wilson at 4:34 PM No comments:

About the boat shop

We live in a wet place -- Gabriola Island, between Vancouver and Vancouver Island on Canada's west coast. Building a boat outside is perhaps possible, but certainly damp and frustrating. Before we began building the boat, we built a boat shop.
The boat shop is 44 feet long by 16 feet wide, and the design is copied from Peter Grøn, who is just finishing building his Arctic Tern project in his somewhat smaller shop. (His project is well-documented here, and so is the shop-building description. Peter's boat is a beauty.)
The basic structure of the shop is a series of arches, built on a plywood floor supported by 2x6 framing. The arches are shaped like a Gothic window. Each side of the arch is made of two 1x4s, separated by 2x4 blocks, glued and screwed together. Robbie and Trevor shaped the sides in a jig so they were fairly quick to manufacture. At the top, they are screwed to a ridge beam. Below the ridge beam, there is bracing: 1x4 horizontally below the peak, and 2x4 for the diagonals.
It is covered in poly, and topped with a huge tarp.
Since the peak is high, it gives room for some storage (bulkheads and backbone for the second hull once the first was underway, mostly). It's a pleasantly airy space -- though rather too airy to work in when the outside temperature is low.
Trevor and Robbie built the shop. It took them approximately 144 hours total, not counting a minor amount of site prep.
Posted by Mary Wilson at 2:52 PM 2 comments: